THE LOST TOMB OF JESUS, a two hour documentary that aired nation wide on the Discovery Channel, makes the startling claim that Jesus did not rise from the grave as the Bible says (e.g., Matthew 28:6) but that He died and was buried in a cave with His family, including His wife and child. The documentary, which claims to have DNA and statistical evidence in its favor, goes on to assert that the place where Jesus was buried has been discovered near Jerusalem.

Could this be true? In a new hour-long presentation, I respond to the claims in the documentary and lay out compelling evidence that the Biblical account of the resurrection is actually true. The DVD and audio CD are now available in ABR's online store.

Posted by Charlie Campbell at 11:09 AM

A plethora of scholarly articles have been written debunking the discovery of the so-called "Lost Tomb of Jesus." Thankfully some of this research is making its way into the mainstream media. CNN.com posted an article this morning, "Scholar: Jesus Tomb Documentary Got It Wrong." Click here to read.

"The Lost Tomb of Jesus": Has Jesus' Family Tomb Been Discovered? 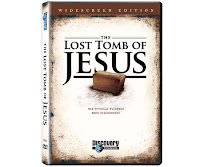 Every year Satan seems to launch an attack on the resurrection in the months leading up to Easter. Last year it was the so-called Gospel of Judas. The year before that it was The Da Vinci Code. Before that it was the Jesus Seminar's findings, and so on. The latest attack is of course "The Lost Tomb of Jesus" and James Cameron's preposterous claim that Jesus' family tomb has been discovered in Jerusalem.
For help on this issue, I offer a rebuttal to the documentary's claims here. Charles Colson points out some of the many problems with the documentary here. You might also click here to see additional resources and articles available on the historicity of the resurrection.
Posted by Charlie Campbell at 10:59 PM