Son of Hamas Leader Turns Back on Islam and Embraces Christianity

There is an amazing story on Fox News this evening about the conversion of Mosab Hassan Yousef, the son of Hamas's leader, converting from Islam to Christianity. He says his conversion came about "after I studied Christianity — which I had a big misunderstanding about, because I studied about Christianity from Islam, which is, there is nothing true about Christianity when you study it from Islam...When I studied the Bible carefully verse by verse, I made sure that that was the book of God, the word of God for sure, so I started to see things in a different way..." God is awesome. Lord we pray for Mosab that You would bless him greatly for his courage in following Jesus! Give him Christian friends who can encourage him in his walk with You and help him to be a light to many more Muslims, in Jesus' name we pray, Amen. For help understanding Islam, click here.

Posted by Charlie Campbell at 9:34 PM 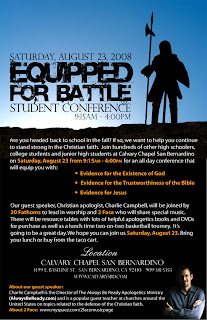 I'll be teaching at an all day apologetics conference here in southern California, Saturday, August 23, 2008 at Calvary Chapel San Bernardino from 9:15AM to 4:00PM. The conference will be specifically geared for junior highers, high schoolers, and college students. Click here for a flier and more details.
Posted by Charlie Campbell at 9:46 PM

The Gospel of Judas and National Geographic Exposed

World Magazine a Christian news magazine that I think every Christian subscribe to, has an interesting update on "the Gospel of Judas." Do you remember hearing about this supposed gospel written by Judas? It had the mainstream media abuzz two years ago. We addressed it on the ABR website here, but here is what World reported in a recent edition of their magazine.

"Two years ago a buzz swept through academia, marrying scholarship with popular culture on the pages of The New York Times and most every other major news outlet in the Western world. Judas Iscariot, the headlines proclaimed, was more hero than villain, more saint than scoundrel. With the unveiling of the first English translation of an ancient Coptic text titled "the Gospel of Judas," the National Geographic Society handed anti-Christian forces worldwide a perfect supplement to the biblical skepticism already unleashed in Dan Brown's novel, The Da Vinci Code.

"Now The Chronicle of Higher Education reports that April D. DeConick, professor of biblical studies at Rice University, almost immediately noticed troubling discrepancies in the translation of the text, carried out by her colleague Marvin Meyer, a professor of religious studies at Chapman University. The Coptic word daimon, for example, was rendered "spirit" in Meyer's version rather than its usual translation, "demon." The change helped portray Judas in a far better light than when Jesus addressed him by that name.

"In another passage, Meyer's translation declares that Judas "would ascend to the holy generation." But DeConick says a negative was left out, and the phrase should have said just the opposite. Overall, National Geographic's characterization of the text has proved grossly misleading. Eager to turn a profit on its $1 million investment in translation and distribution rights, the organization apparently sensationalized its discovery, filling its promotional materials with descriptions of Judas as "Jesus' closest friend" and "the most loyal of all the disciples."

"In reality, the text depicts a Judas who turned Jesus in as a sacrifice to a demon god named Saklas. That narrative squares with responsible academic opinions that the Gospel of Judas is nothing more than a Gnostic fantasy authored in the second century to legitimize a sectarian view of the life of Jesus. No evidence exists to suggest Judas as a possible author or the account as historically based. Scholars now agree it is fiction. But National Geographic isn't offering refunds." (Copyright © 2008 World Magazine, June 28, 2008, Vol. 23, No. 13).

Posted by Charlie Campbell at 10:14 PM