A lady emailed me a while back and was offended by an article on our website wherein I mention the Bible’s teaching on Hell. She said, “I can’t believe you think this! You’re just trying to scare people. That’s not very loving.”

Well, in response to that (and I told her this), I think being forthright about Hell—if it’s done with the right heart—is actually very loving. You won’t catch me standing on a street corner with a bullhorn yelling at people to turn or burn. I don’t think that’s very winsome—or effective. But I do think sharing the truth about what the Bible says regarding eternity in a humble, straightforward way is very loving. Let me illustrate… 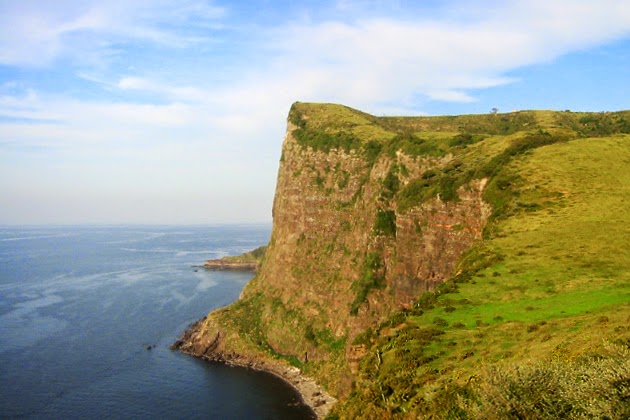 Imagine a blind woman walking towards the edge of a cliff. You and I are familiar with the terrain. And she’s not. And we can see where the woman is heading.  And we know there is a 500 foot drop down to jagged rocks and cold pounding surf. Would it be unloving to warn her about what’s coming? No. It would actually be unloving to let her continue unwarned.

There are some beautiful rivers in the world that have signs warning boaters of what will happen if they continue down the river.  The signs are big bright orange and yellow signs that say: “Pullout canoes here. Danger waterfall ahead!!” Now, you could look at those signs and say: 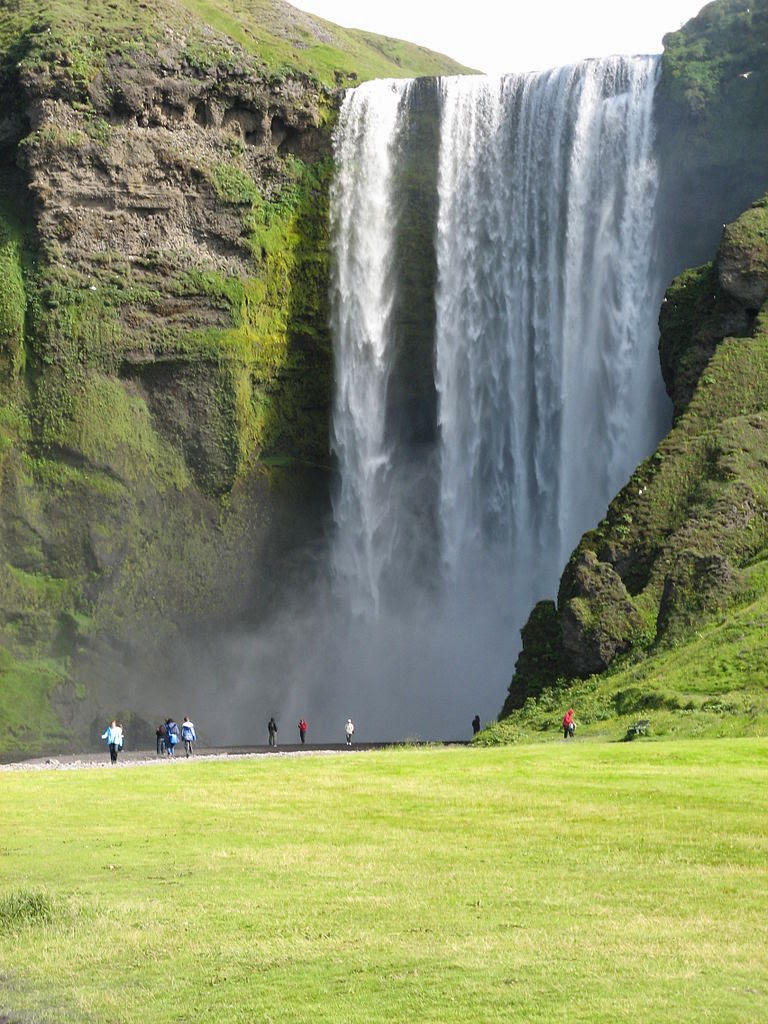 And if there really wasn’t a waterfall, those things might be true. But what if there really was a waterfall? Well then, the Park Ranger who put up the signs was doing a very loving thing wasn’t he? It was out of concern for unaware boaters that the signs were put up...because if you continue on down the river, you are going to have some serious problems.

That’s why we speak about Hell. That’s why the Bible speaks so clearly about these things. Hell actually exists. It’s a real place. So, we speak of these things in love. We don’t want unaware boaters (people without Jesus) to perish. They are sailing along the river of life unaware that they are headed to judgment.

If you yourself are headed toward that judgment and want to make sure you escape God's wrath, please read this short article, Finding Peace with God, and place your faith in Jesus.

For more resources that address the Bible's teaching on Hell, see ABR's section on Hell here.
Posted by Charlie Campbell at 1:28 PM

Jesus said, "I am the way, the truth and the life. No one comes to the Father except through Me" (John 14:6). I find it interesting that the word “Christianity” was not the title chosen by the disciples to describe the movement they were a part of. They did not even refer to themselves as Christians, at least initially. The title “Christian” was given to them by outsiders in the city of Antioch (Acts 11:26), possibly as a term of derision. The disciples referred to faith in Christ as “the Way” (see (Acts 9:2; 18:25,26; 19:9,23; 22:4; 24:22). They did not refer to Christianity as a way, some way, my way, or our way; the name they used was the Way. That was very telling of their familiarity with Jesus’ words in John 14:6 and their belief in the truth of them.
Posted by Charlie Campbell at 4:07 PM

Is There a Contradiction in Jesus' Genealogical Records?

Critics of the Bible say that the Gospels are full of contradictions. They are quite mistaken about the matter and I address that here. But one particular difficulty that seems to come up more than others has to do with Jesus's genealogies mentioned in Matthew's and Luke's Gospels. They seem to differ. Jesus seems to have a different grandfather in Luke 3:23 (Heli) than He does in Matthew 1:16 (Jacob). So what's the solution? Norman Geisler and Thomas Howe provide the following solution in their fantastic book, The Big Book of Bible Difficulties:

"This should be expected, since they are two different lines of ancestors, one traced through His legal father, Joseph and the other through His actual mother, Mary. Matthew gives the official line, since he addresses Jesus’ genealogy to Jewish concerns for the Jewish Messiah’s credentials which required that Messiah come from the seed of Abraham and the line of David (cf. Matt. 1:1). Luke, with a broader Greek audience in view, addresses himself to their interest in Jesus as the Perfect Man (which was the quest of Greek thought). Thus, he traces Jesus back to the first man, Adam (Luke 3:38 ).

"That Matthew gives Jesus’ paternal genealogy and Luke his maternal genealogy is further supported by several facts. First of all, while both lines trace Christ to David, each is through a different son of David. Matthew traces Jesus through Joseph (his legal father ) to David’s son, Solomon the king, by whom Christ rightfully inherited the throne of David (cf. 2 Sam. 7:12ff ). Luke’s purpose, on the other hand, is to show Christ as an actual human. So he traces Christ to David’s son, Nathan, through his actual mother, Mary, through whom He can rightfully claim to be fully human, the redeemer of humanity.

"Further, Luke does not say that he is giving Jesus’ genealogy through Joseph. Rather, he notes that Jesus was “as was supposed” (Luke 3:23) the son of Joseph, while He was actually the son of Mary. Also, that Luke would record Mary’s genealogy fits with his interest as a doctor in mothers and birth and with his emphasis on women in his Gospel which has been called “the Gospel for Women.”

"Finally, the fact that the two genealogies have some names in common (such as Shealtiel and Zerubbabel, Matt. 1:12 ; cf. Luke 3:27) does not prove they are the same genealogy for two reasons. One, these are not uncommon names. Further, even the same genealogy (Luke’s) has a repeat of the names Joseph and Judah (3:26 , 30).

"The two genealogies can be summarized as follows: 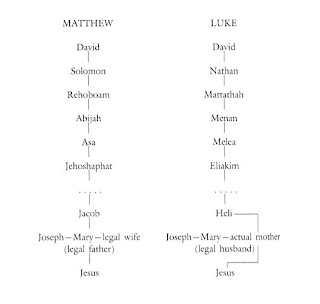 If you don't own a copy of The Big Book of Bible Difficulties, I highly recommend it to you. Formerly called, When Critics Ask, it has been updated and republished with this new title.
Posted by Charlie Campbell at 2:50 PM